Reading the news breaking about 3pm that a train had derailed in nearby Amherst, the baby and I resolved to have a closer look at the unusual situation. The plan was to bike in along the Norwottuck rail trail which runs alongside the section of track where the calamity had occurred.
But getting to the trail entrance closest to us, we found the fuzz had already taken steps to quash the satisfaction of curiosity that we were seeking. 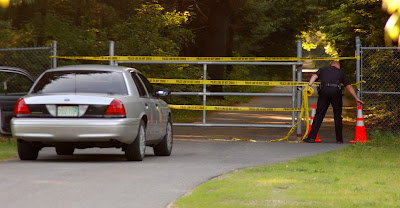 We waited for the officer to leave, and persuaded ourselves that the yellow tape was really for holding less intrepid investigators at bay. We mounted up, ducked the tape, and rode.
About a mile in we could see through the trees the beginnings of the stricken train. It was already about 3 hours or so since the wreck happened and the engine was gone. But several cars in, each successive car began to look like it was sitting on the tracks a little more askew. 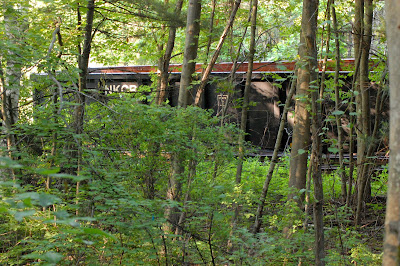 Just further on, we got to where both the trail and the tracks crossed Station Road in Amherst and sure enough, there it was. 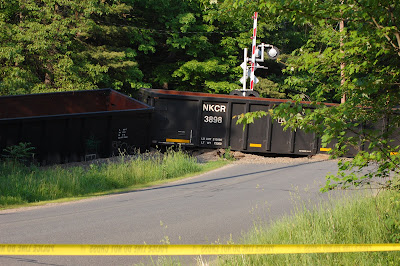 As advertised. The officer standing nearby greeted us with "There's something you don't see every day!" 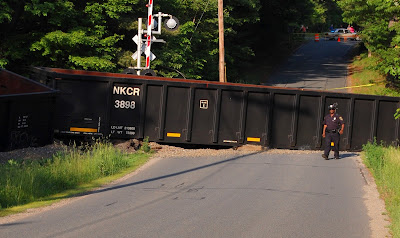 No, indeed. No we don't. About 4 or five cars right near the road were really blotto-ed, and dug pretty good to the street where tons of moving steel had plowed into the relatively soft asphalt; probably made all the more pliant by the mini heat wave of the past couple days. 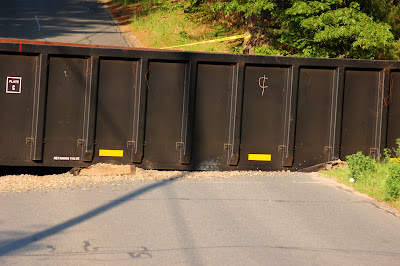 Crews were on the scene, but apparently waiting for the inspectors and crash investigators to do their work. 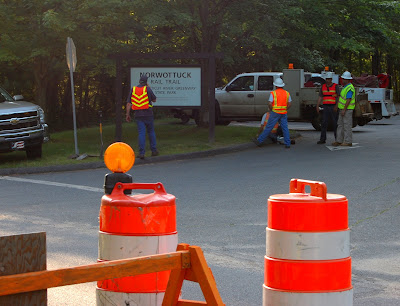 We watched across the bog as a handful of hard-hatted, clipboard toting officials were combing over the train and track; from the first car to several hundred yards behind the last car. 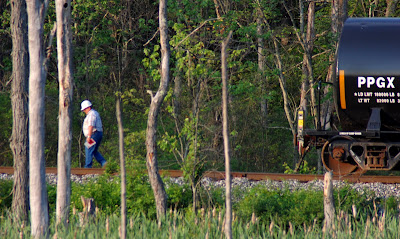 We saw them take a particular interest in a couple sections of track,

...and we wondered what they found. 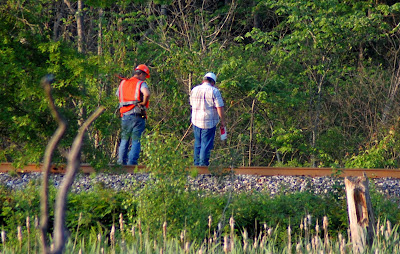 Well, I wondered what they found. About an hour or so had gone by and my sidekick had just about lost interest in giant tottering trains, road blocks and investigations, and was becoming more and more persuasive about heading back home for some dinner. 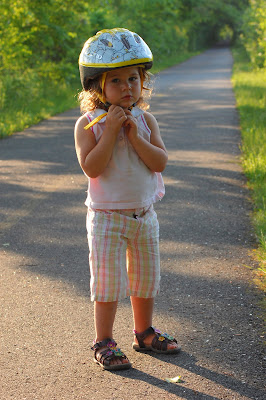 Time to go. We'll have to read about this in the papers...
1 comment:

My nifty porch-mounted rain gauge registered that a well over 4 inches of rain had fallen this past week. With our area's rain average running about 50 inches a year, (or roughly 1 inch a week), we got hammered this week, indeed. And it wasn't even the rain that was so weary; it was the nearly complete lack of sunlight all week setting misery meters high.
But that finally broke Friday, if just barely.

On a drive to Atkin's Farm for green stuff, we spotted some portentous thunderheads looming in the distance. 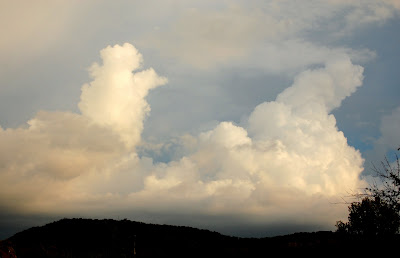 Lightning and thunder could be seen/heard when we emerged from the store; so we decided to do the opposite of the common sense thing, and seek higher ground to have a look around. Mt. Pollux was conveniently on the return route, and it had the advantage of a lofty parking area with great views, so we could stay in the relative safety of the auto if the lightning got to intense. We're not completely crazy, after all. 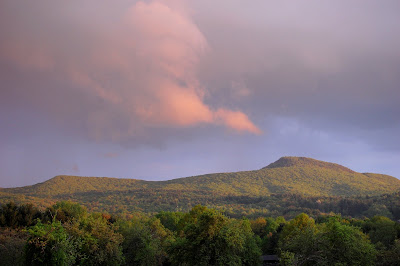 We squeezed into a tight parking spot between a couple hipster types in their beat up station wagon, and a collegy-professory type in his ride. To our right, the sun was just sinking in for the night... 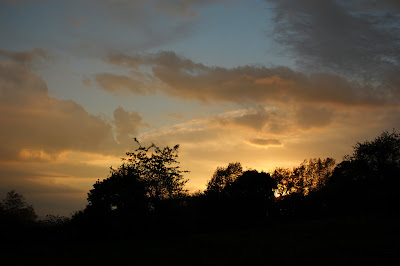 ...while to the left, the torrent approached. The sun managed a few breaks through the cover, and turned the dark mass of water approaching into an orangy mist. 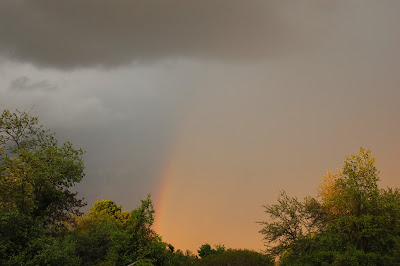 The lightning began to crackle and flash more often and closer, and then to our amazement, the collegy-proffessory guy got out of his car, metal framed umbrella in hand, and started on foot up to the bare summit of Mt. Pollux! Dead man walking, we mused to ourselves. Then a few minutes later, just as the first fat raindrops began to strike our windshield, another car came up the hill and parked quickly, and out ran a laughing young couple who also trotted up the trail and towards the top. Dead couple walking, we mused to ourselves. Isn't it lightning 101 not to seek higher ground during a lightning storm? The hipsters stared blankly from their station wagon.
Just before the downpour was finally upon us, the sun found a complete break in the cloud, and set the terrain alight in color and flame. 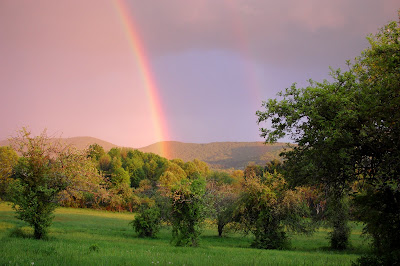 Then close on it's colorful heels came the rain, or deluge to be more precise, with lightning cracking right above. We had gotten our pictures, so we waved adieu to the hipsters, who stared back blankly, and we were out of there.
On the way home, in the midst of the pounding storm, an ambulance went screaming by heading in the direction we just came from. Kelly and I looked at each other. Nah. I'm sure they knew what they were doing...
Getting home, my nifty porch-mounted rain gauge showed that another 3/8 of an inch had fallen, just from that passing storm. How much more is in store.
1 comment:

We checked out the 2011 installment -and 30th anniversary- of Northampton's annual Gay Pride Parade. Or simply Northampton Pride, as it's come to be called. 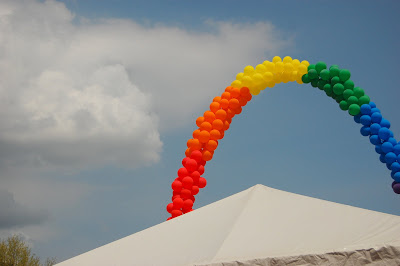 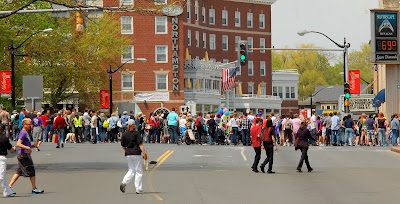 The attendance seemed just a scoche off compared to last year, but there was a healthy showing among the LGBT community, the supporters, and the gawkers. 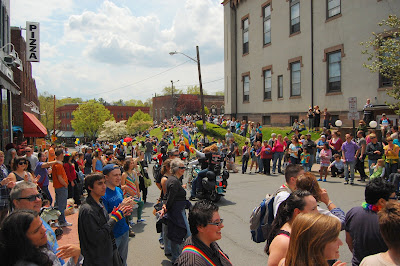 Perfectly late as usual we still managed to find a good viewing perch above the fray along the railroad bridge spanning the route, and in time to view the majority of the proceedings. 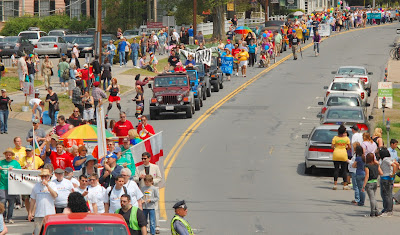 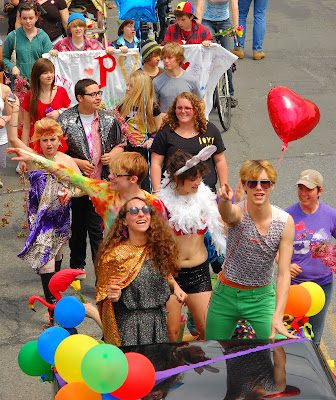 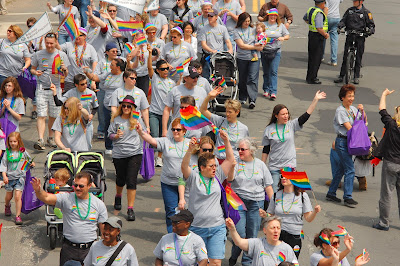 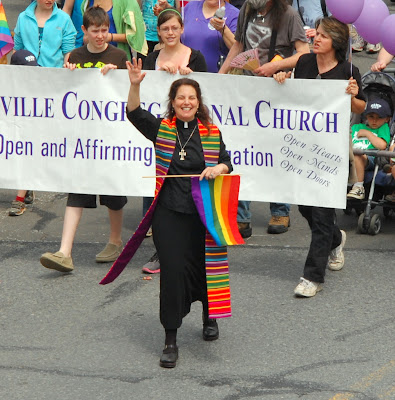 Kelly and I count ourselves among the multitudes of supporter-gawkers, as my camera subject choices and some gay acquaintances and a Pride Survey will attest. 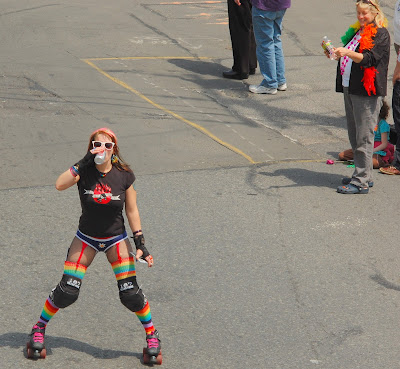 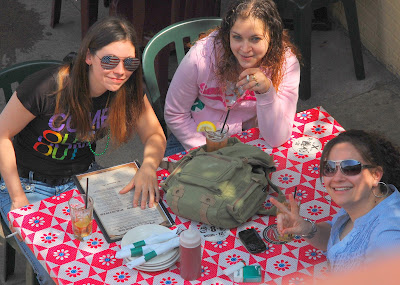 We're not fervent, but hey, we're there. 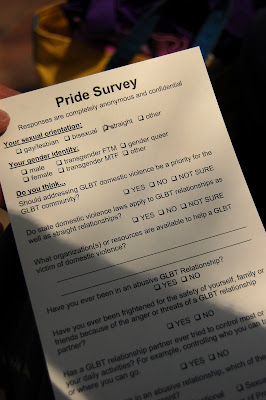 I suspect it's detached side liners like us that make up the bulk of attendance at an event like this. 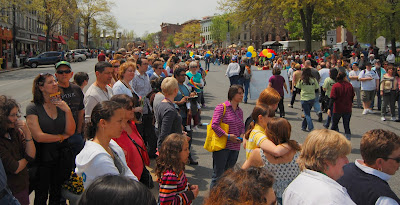 And it's probably the casual spectators like us that have helped slowly transform, for better or worse, this once risk-filled march for equality into the easy going celebratory parade it is now... 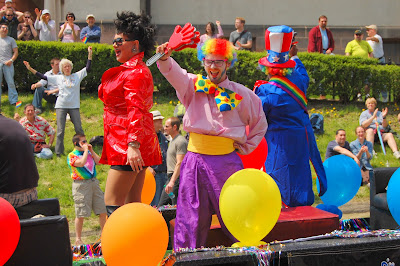 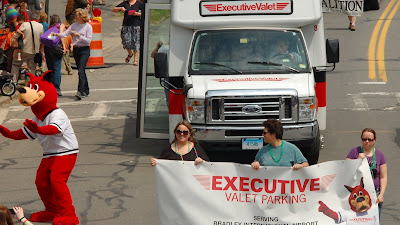 As I've read recently, some of the old time warriors and original marchers have lamented that the cause has lost it's way, that too many groups seem to have a dog in the fight now. 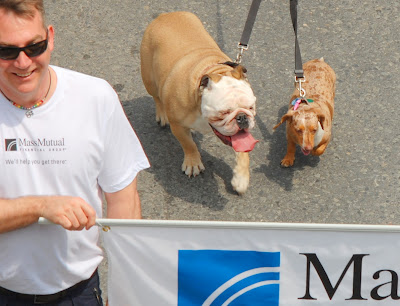 Still, what may be seen as a decay of the fighting spirit exhibited 30 years ago... 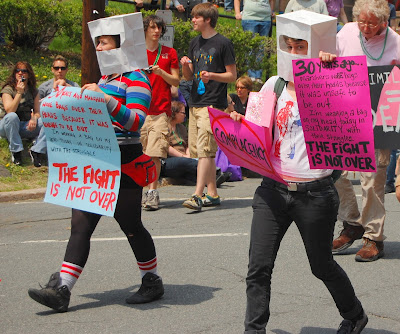 ...could just as well be considered unintended consequences of accomplishment. Coat tail riders and fair weather friends inevitably come part and parcel with success. While there's more to do and more to achieve; with the front lines of the battle having come such a considerable way... 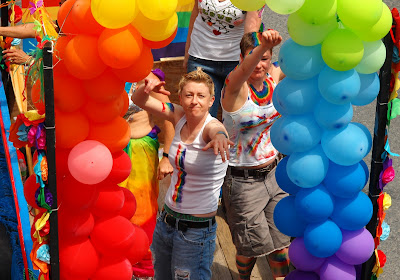