Fall Back, to Montague

There's a new rail-trail in the valley. It's a 4 mile section of the developing 44 mile long Franklin County Bikeway. http://www.frcog.org/services/transportation/trans_bikeway.php

This 4 mile section is called the Canalside Trail. It's located along old factory canals in Montague. They had recently completed the final phase here. Even though it had gotten cloudy Sunday afternoon, we headed up to scout it out. 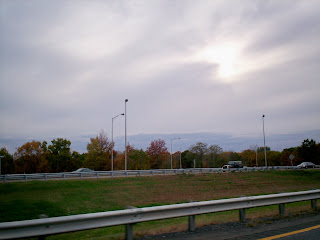 The trail begins on the Montague side of Barton's Cove, where there is a parking area and a waterside park. There was some kind of photo-meet going on, there were a lot of kids with tripods and cameras there on Sunday. 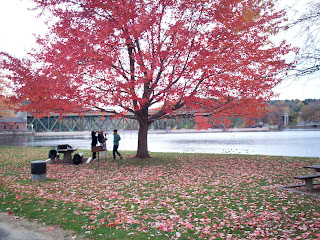 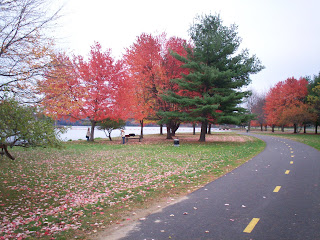 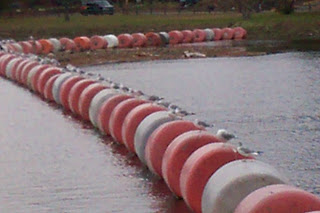 Don't ask me what this thing is... 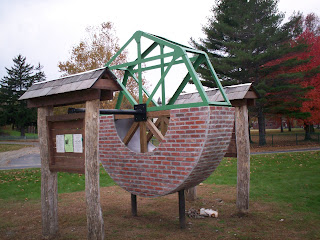 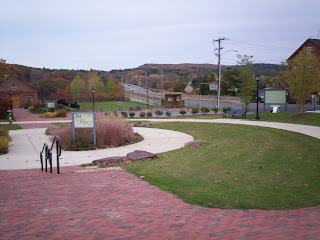 The trail goes by a fish viewing area, then follows the canal. 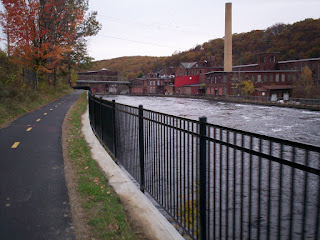 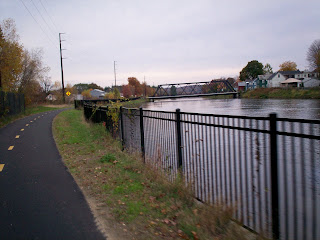 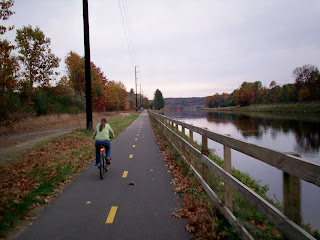 The trail is nicely done, with tall black metal and wood fencing to keep people out of the canal. There are old factories on the other side. Farther on the canal gets wider, and the trail runs along some power lines. The land is nicely cleared, and the woods thinned out in this section. There were tons of Canadian Geese sitting in the water when we went by. 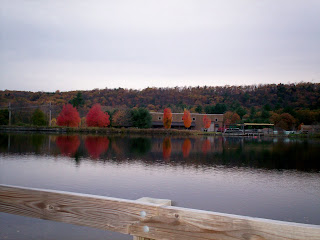 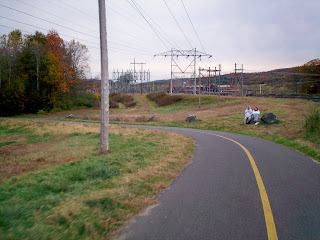 The first half of the trail suddenly seems to come to a halt at Montague City Road. There are no signs to direct you to the next section, yet. If we didn't know the trail was 4 miles, we would have thought it ended there.

We crossed over and down a side street on the other side. Down another street and past this old water tower, we saw where the trail continued on. 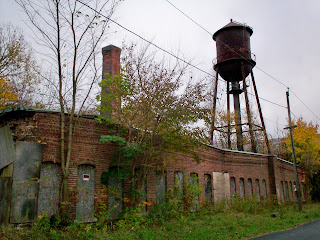 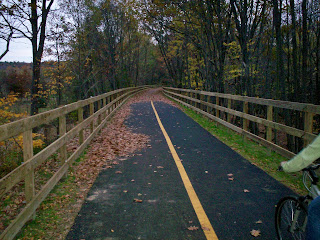 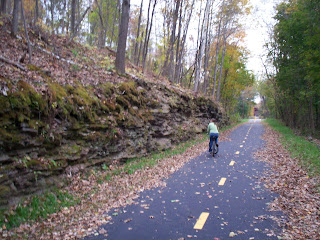 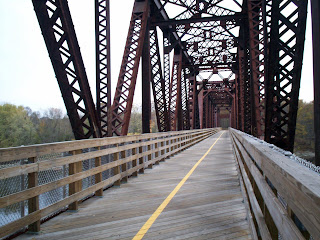 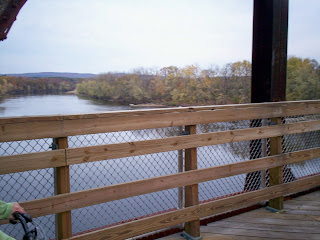 Not too much farther and you reach the end. The trail empties out into a big train yard. You can go right up to the tracks and watch the trains roll by. These three engines were heading out when we got there.

In this age of liability and litigation, I'm guessing it won't be long before the rail yard is fenced off, for our own safety of course.

The trail was, overall, impressive. It had elements of the Norwottuck trail with the bridge and canopy of trees, the Eashampton Manhan trail with it's easy 4 mile length and fencing throughout. It even kind of reminded me a little of the Cape Cod trail, with the canal running alongside, (though much smaller and sans the boats).

The canal and rail-yard give this trail it's own distinctive character. It's another option for some outdoor activity, and a nice addition to the growing list of rail trails in the valley.

I have watched this trail evolve. I have worked up in the Airport Industrial Park for 10 years now. It is finally nice to see it completed, and makes for a perfect lunch time break during the work day. I have both walked and ridden it. I am so glad they finally put it in.

The signs are finally up directing you across the road the the second part of the trail. Also, another option is to ride on the other side of the canal, over by the USGS- you can see it as you are riding along the power lines.

Oh, by the way- all the cameras and tripods were probably the Hallmark School students doing their projects- there is a school of photography right up Millers Falls Rd, on the corner of Industrial Blvd.

Great blog, b the way. It is nice to see someone write and photo the beauties of our valley.

Regarding the rail bridge, you may not have noticed but the bridge actually dates from 1880. See the plaque on the western-most span. The other two spans, dating from 1936, were created after the big 1936 flood destroyed their predecessors. See the Wikipedia article "Canalside Rail Trail Bridge" for some details. The bridge was partially washed away by the work of the water and the action of a wooden covered bridge from just up stream running through it. See WGBY documentary on the 1936 flood for more.

Thank you for doing this. I live on Cape Cod along the Shining Sea Bikeway and I am starting a hobby of roller blading on New England bike paths. It's great to see pictures of the bike path and to read your blog.

You mention the Cape Cod trail with the canal running alongside but that's only one of our bike paths. So far the Shining Sea Bike Path in Falmouth is the most beautiful one I've seen anywhere. It is along Vineyard Sound and through the Sippewissett Marsh, from Woods Hole up to North Falmouth (it was recently extended).

I've been on bike paths in Lexington, Ma. (to Bedford, Ma.) and in Chevy Chase Md. (to Georgetown in Washington DC) and 3 on Cape Cod (cape cod canal, one on the outer Cape near Nickerson park, and the Shining Sea bike path in Falmouth). ALso, a bike path in Providence RI (to Bristol RI), and one in Pittsfield, Ma. (to Williamstown, Ma). I would like to blade on this one.

Any other favorite trails?