With A Capital E

There was a long stretch, where for years and years, and for reasons I'm not quite sure of, I had completely avoided the Big E. Then I went again a few years ago, skipped a year or two, then went again last year. Now here I am again, and it looks like I'm back on a roll with this fair. If you can call it a fair. It is like it's name says: Not just the Eastern States Expositon, but 'The Big Exposition'... 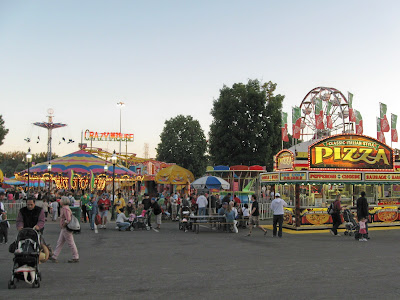 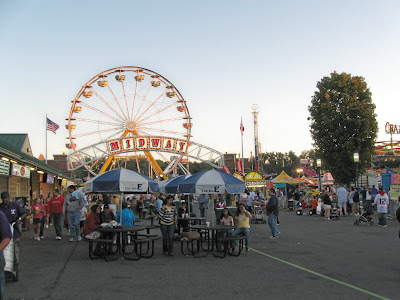 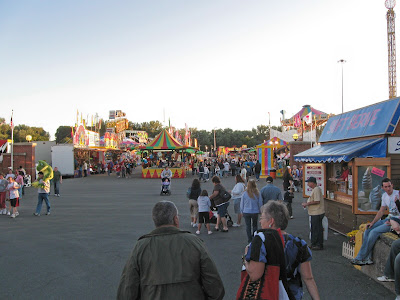 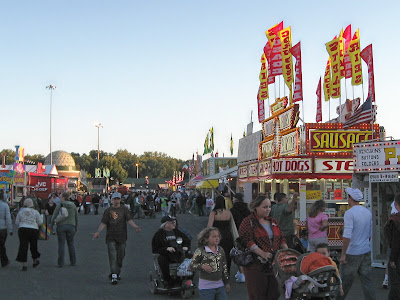 It's huge. And it seems to have more of a circus atmosphere than a traditional farmer's country fair. Here there are elephants, trained seals, miniature horses. As a matter of fact, it has a circus. And it has a traditional fair, and it has a midway rivaling small theme parks. 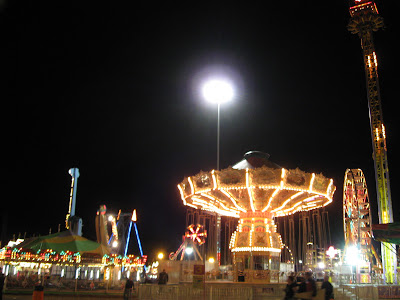 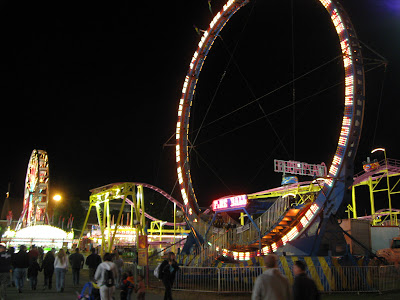 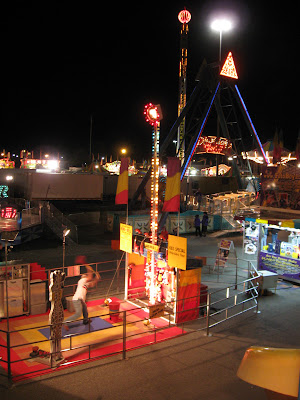 And the circus seems to figure heavily in the theme of attractions. There are a few exhibits specifically dedicated to the great circuses of old. There is a museum with a miniaturized version of the old big-top circuses that came and set up over acres of land, turning the local counties upside down during it's stay.

Another exhibit is dedicated to posters and pictures from that heyday. 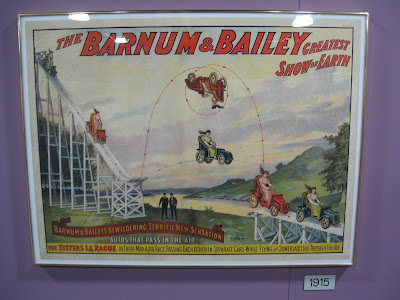 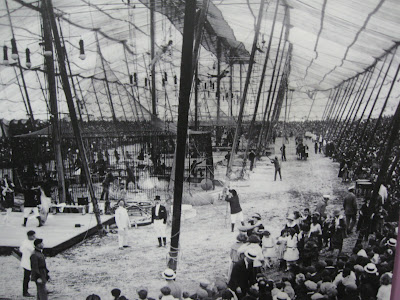 The Budweiser Horses also do a show and participate in the parades. Here they are in their dressing rooms afterwards. 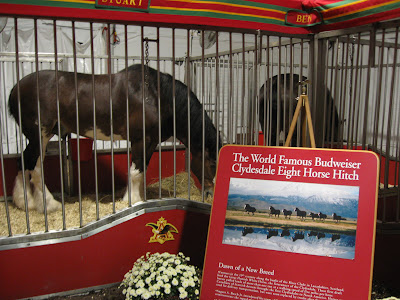 We decided to go mid-week to avoid the traffic snarls of the weekends, and besides, Thursday was Massachusetts Day at the Big E. After 5 pm the entrance fee is 5 bucks, which didn't hurt either. We made sure to check out all six of the buildings, each representing one of the six New England states. The Vermont building showcases it's great cheeses, the Maine building it's potatoes. People love Maine potatoes. They were lined up all the way out the door and then some, to purchase a steaming hot one. 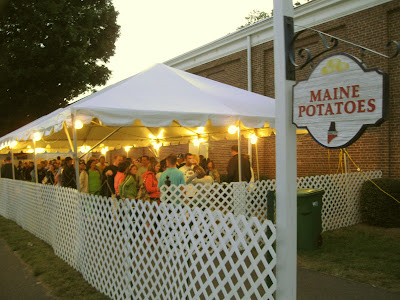 Connecticut has it's Legos. 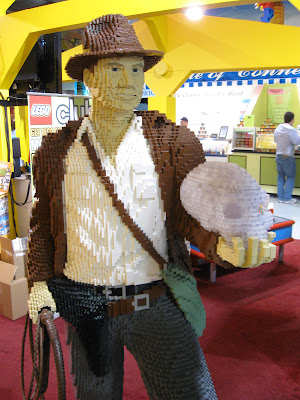 There is very little of the quiet country charm of the hill town fairs here. Your definitely in the urban realm, there's no escaping that fact. But what it lacks in intimacy it makes up for in sheer spectacle with amazingly high volumes of people, sights, attractions and vendors. 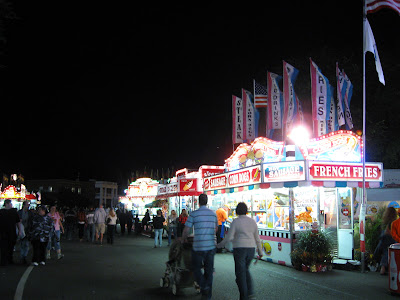 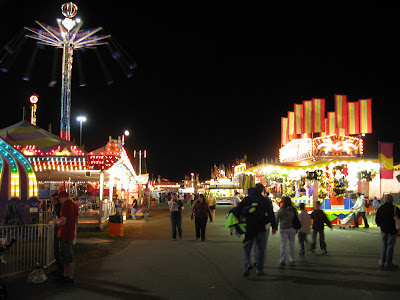 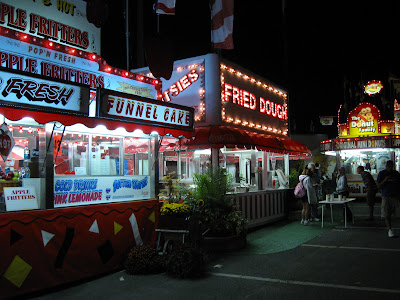 They had had a Massachusetts Day parade right at 5pm, which we missed, but we did get to see the 7:30 Mardi Gras parade. Replete with spooky floats, and beads tossed (hurtled) into the crowd. 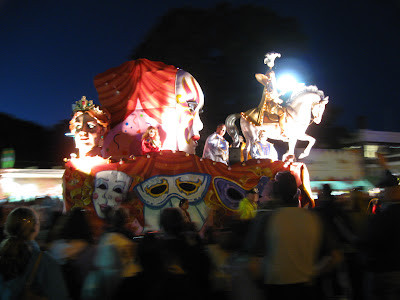 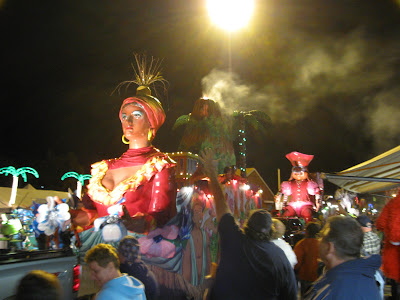 Right outside the buildings a Sea Lion show was going on. Smart critters. 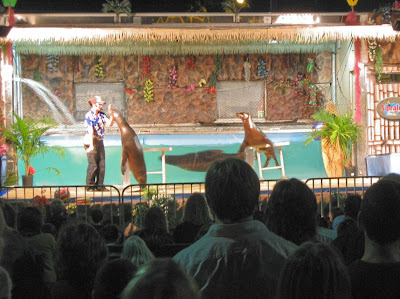 The Big E is definitely the biggest late summer fair in the northeast. Whether that makes it better than the smaller fairs out in the country is up to you. 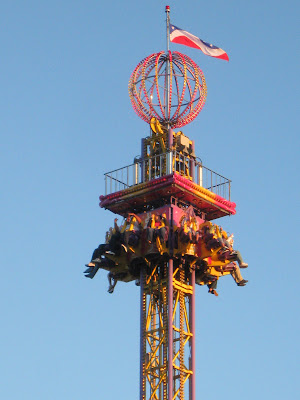 But one thing is for sure: the Big E is big.

The Big E should stick to its potatoes and legos and stay away from the hideous animal cruelty that it seems to favor so heavily. Sea lions, who should be swimming for miles every day, confined to a miserable pool and handled by humans. Bears pacing psychotically in tiny glass cages. Elephants forced at the point of a bullhook to perform physically dangerous tricks. The list goes on and on and on. Look around, and take just a minute to consider the lives of these animals, absent anything that is natural to them, on a huge parking lot for your entertainment. It is a disgrace.

Thanks for the review of the Big E. My mom and sisters used to make the trek from Pittsfield to the Big E every year, but I was always a little dubious about its merits despite never really fully grasping what it is all about after only making it there once and being aghast at the crowds.

It's much easier on traffic and crowds during the weeknights. I know what you mean, Mary. It's not for everyone, but it is certainly a concentration of people and spectacle...

Reuben, I agree that it must be torturous for many of them to be in that situation. It's a shame, but like zoos, these few animals are some of the only examples most people (especially kids) will ever see in real life. And hopefully the more people see and are aware of these creatures first hand, the better they'll be treated as a whole. The circus environment is a little more outdated and crueller than a zoo, but I think both provide a bit of a neccessary evil for people to learn.