It was a New Moon on Monday night, as I took scruffy out again for a walk around the block. It was also cloudy, so there was absolutely no natural light to be had. But I gave the picture-taking a shot anyway, since I had gotten several positive responses from the last night-time outing. Here's an old four-family apartment building I used to live in, just around the corner from where I live now. 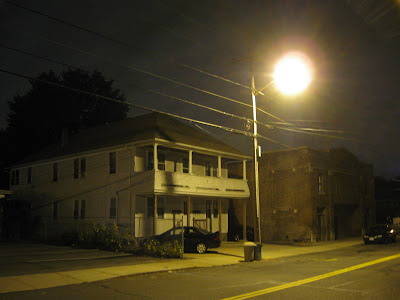 The building's been slightly renovated since then, but in my time it was a big old drafty apartment, with high ceilings, old banisters and railings on the steps, and some surviving old fashioned decorative interior woodwork, like big wooden pillars separating the two front rooms. It had the original turn of the century windows, whose panes had worn uneven, giving the passing cars and people outside slightly warped shapes. The whole building in general was in teetering condition at the time, the floors leaned just a little bit, things creaked as you'd walk, wall cracks here and there; and towards the end of my stay, I found that the walls and hidden nooks harbored critters. It did have that nice big porch out front, and another out back, which I made good use of...

Next door to that building is the husk of an old film house called the Burr Theater. It was built in 1927 by local owner Frank Burr, and operated until 1967. (According to former valley resident Larry R., you could take your date out for a show for a mere 40 cents...). The marquee is long gone, and it's been used for decades as a store house for the lumber yard on the other side of it. I've never been in it, but blogger VanDog's quest to save the classic Victory Theater in Holyoke has me curious about what it looks like in there... 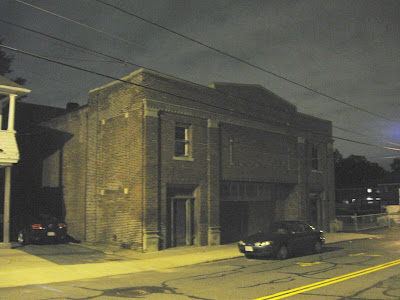 The bunker-looking building below used to be Valley Bank, way back in the day. As a kid I always wondered what was up in that windowless second floor. No windows at all up there, just a few very large black grates, breaking the faceless thick concrete walls that make up two thirds of the building. The science fiction in me went mad with wonder whenever I thought about what could possibly be going on up in there; Was it a ventilation shaft, to some vast underground military bunker, posing as a bank? Was it an emergency power generator? A misslie silo? A satelite destroying laser beam generator, right here in my home town? 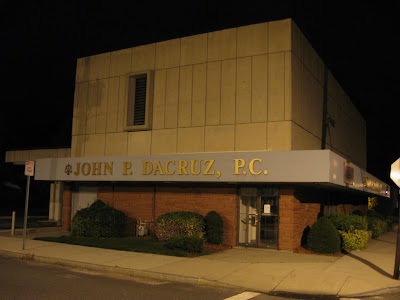 In all actuality, it probably just contained a couple small accountants' cubicles, with desks and counting machines, and a maybe a couple very pale accountants...

Down by the Chicopee river, the long Ludlow Mills buildings stretching for probably most of a mile, end with this iconic clock tower, which is on the town's seal. 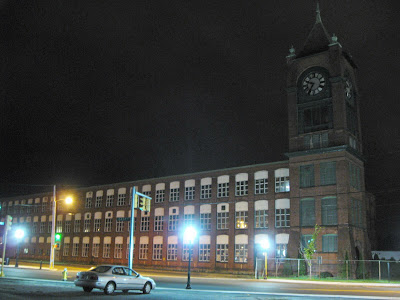 It's the mill that created this town, and most of the oldest surviving buildings were built by or for the mill's management and employees. Most of those buildings are located in the area between the mills and the bridge that goes over into Springfield. The handsome business block below can be seen in some of the oldest pictures of town. The top half are now apartments, and various shops and stores come and go on the first floor. 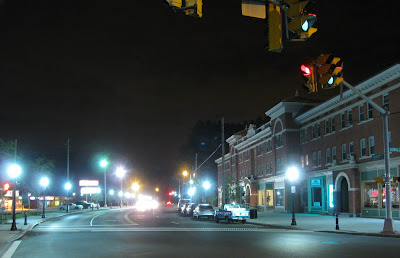 The Exit 7 Players perform in a theater just one street over from us. Kelly occasionally tries to get me to check them out. Maybe we'll take in a show this coming holiday season... 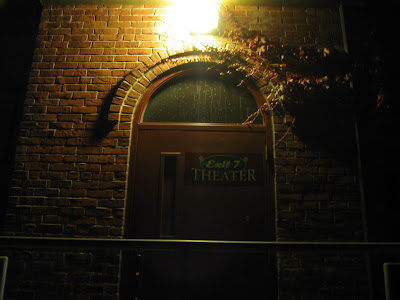 Throughout my walk, the police had (rightly) been taking notice of the strange fellow and his dog, stopping to take pictures of businesses and buildings in the dark of night. They cruised by slowly several times, staring directly at me as they passed. Looking up from the camera I grinned back, nudging my head a little, as if to say "Uhm, every thing's cool over here, just taking pictures in the middle of the night..." In my head I readied an explanation; prepared to play the blogger card if need be. But they didn't stop to question...this time. 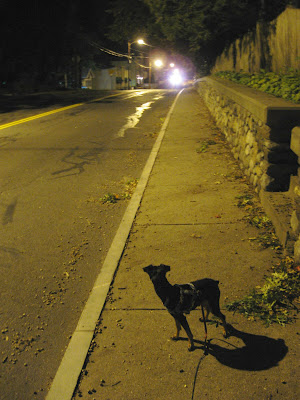 We'd better get home Nemo, the heat is on...

Back in the light of day on Tuesday morning, the stormy clouds were lining up and marching off to the horizon. 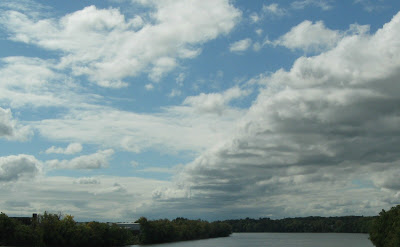 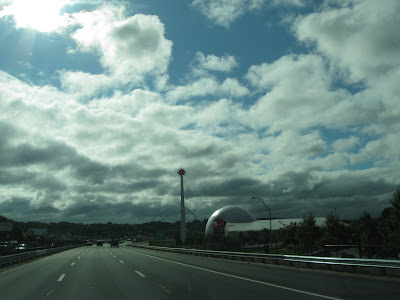 Later in the day I happened to glance over while driving home, just in time to catch the last rays of September... 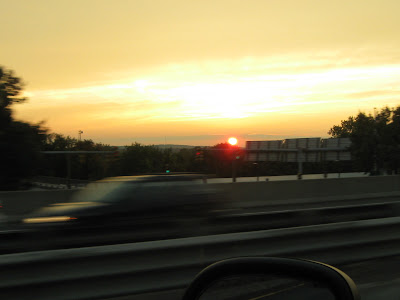 October is at the door step...

Is that the Burr Theatre ?